What's the use of it: The functions 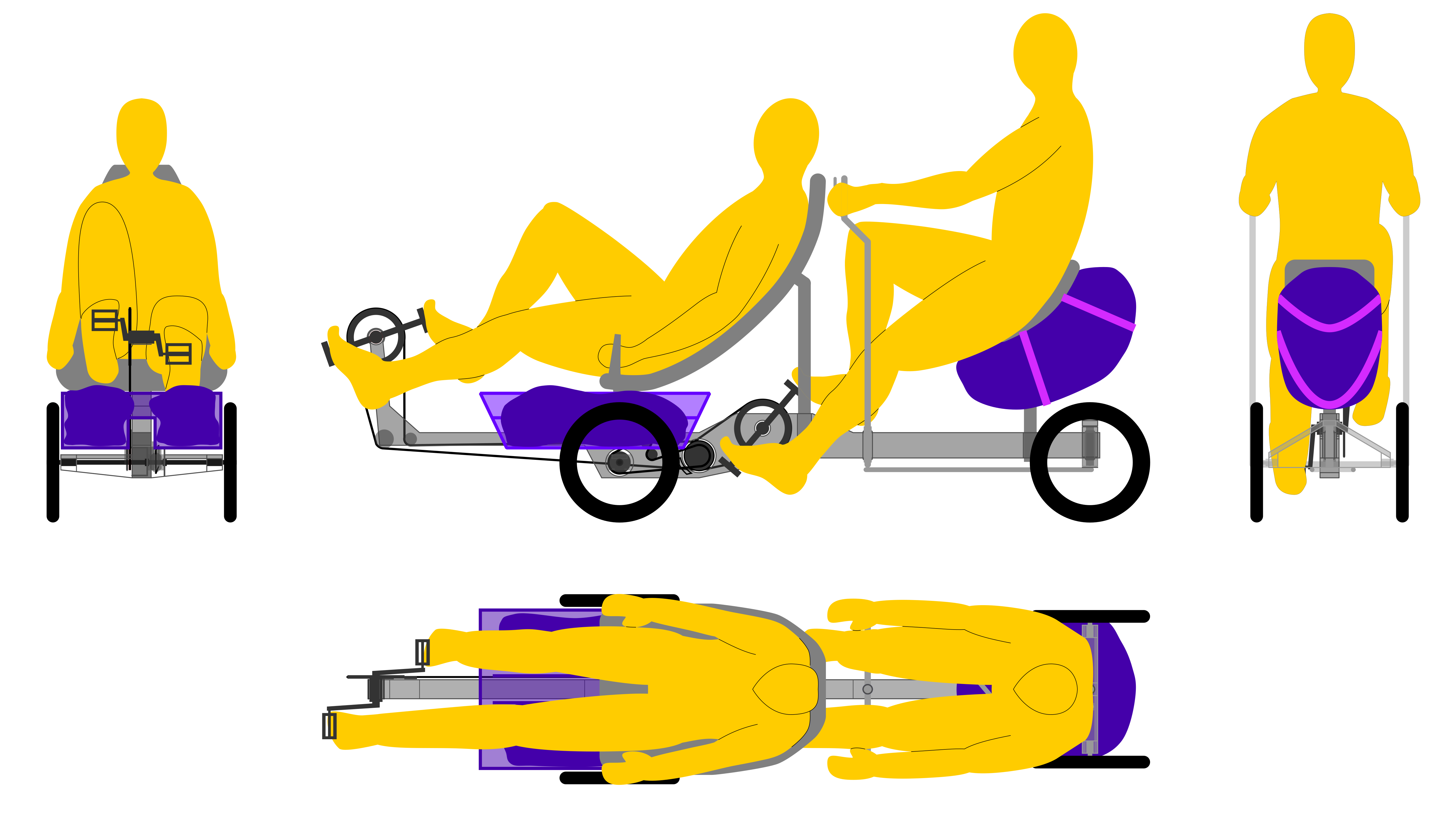 As a tandem, the versatile cargotandem can be used for daytrips and longer cycling tours. Below the front seat, there is space for a rather shallow transport box, bigger luggage can be stowed under the rear seat.

A temporary solution from school age: children contribute physically, but still do not steer themselves. As long as the children are small enough, two of them can ride side by side on the front seat. 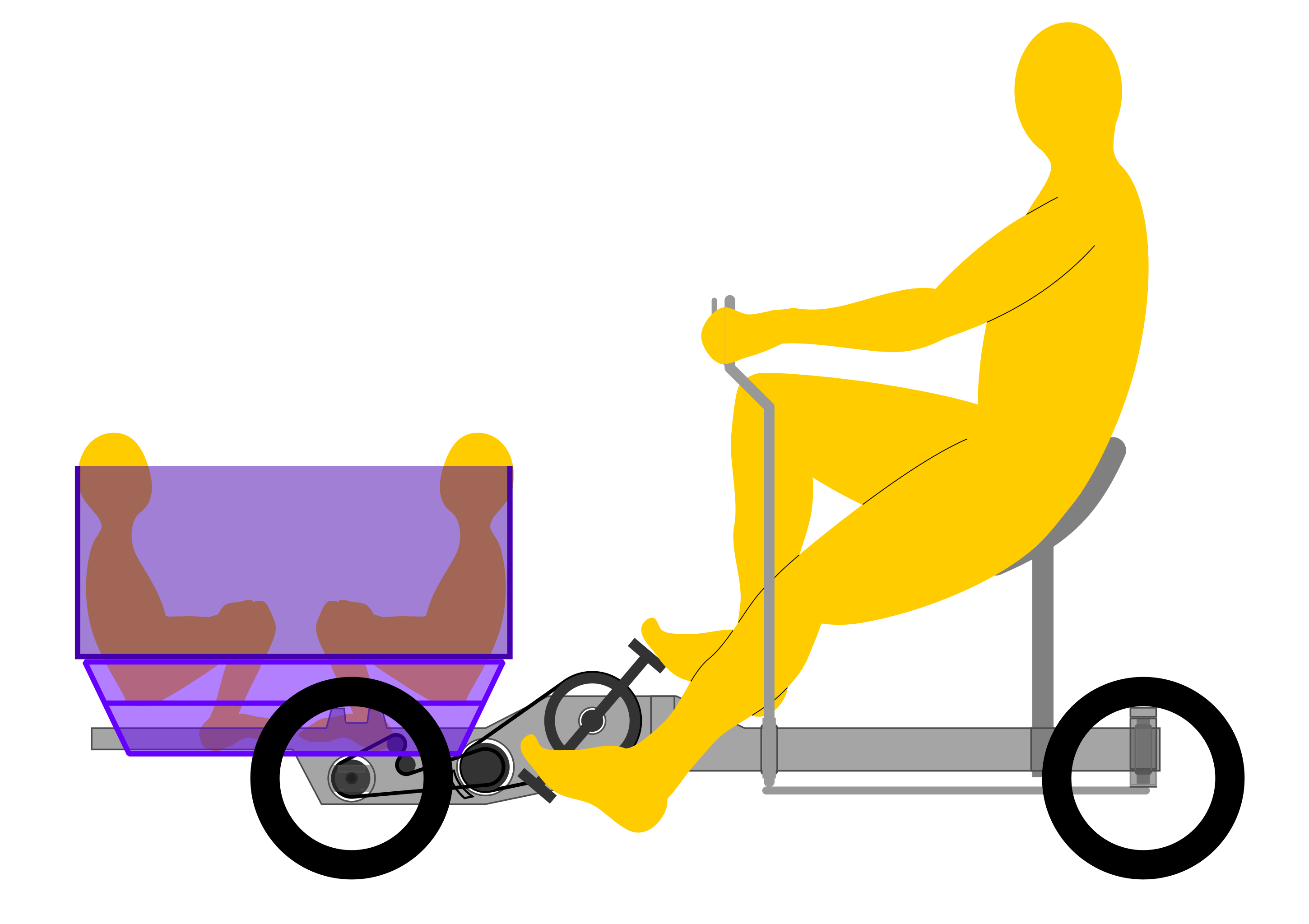 Toddlers can ride in the versatile cargotandem similarly as in a cargo bike. 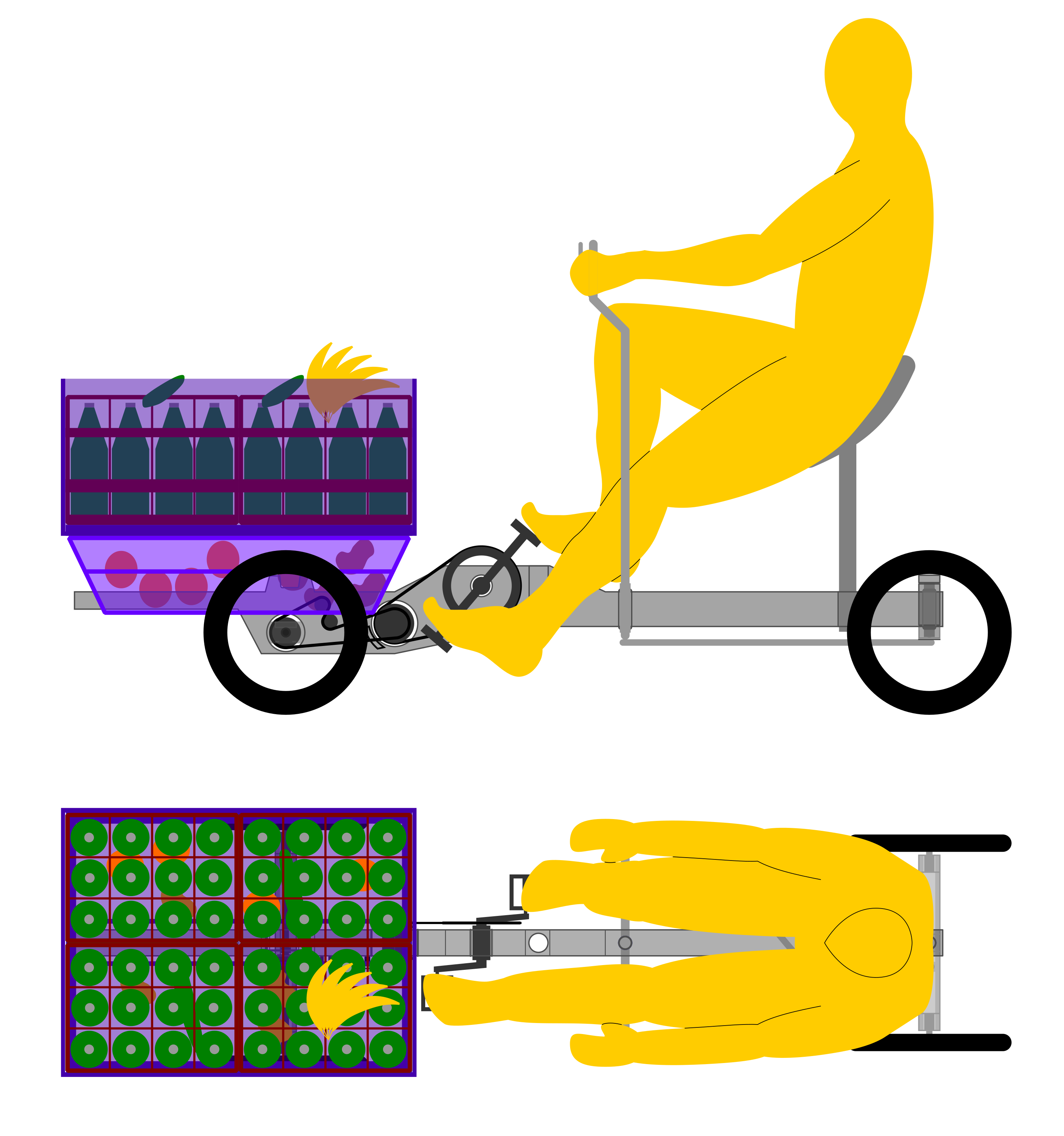 In the big transport box there is space enough for four beverage crates and some further items.

Wider, rigid items can be fixed by straps directly onto a supporting frame above the shallow transport box.

Cycling in any weather without complicated or unreliable full-length rain cloth! The heads of the adults are protected by helmets with shield and short cape, ensuring all-around visibility and reducing the vehicle's lateral surface exposed to crosswind. 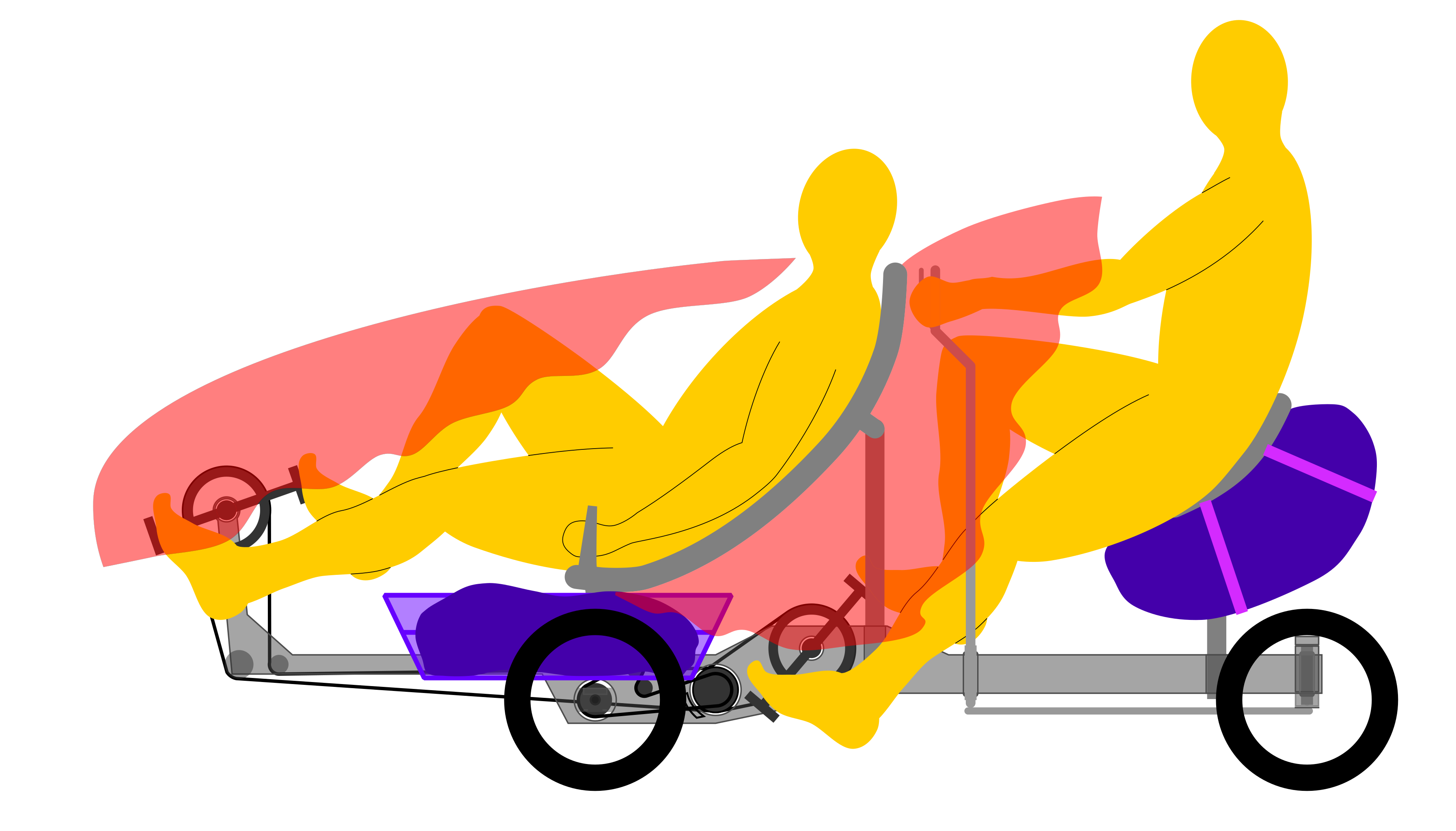 For more weather resistant users, a lighter version of the rain cover could be sufficient, making the vehicle more crosswind resistant.

Why it's constructed this way: The technology

The basic configuration is derived from the semi-recumbent tandem (recumbent for the front rider, upright for the rear rider), facilitating communication between the two riders and providing best view and visibility for both, and the popular front loader cargo bike with good view of the load or the children. Compared to the "Performer" semi-recumbent tandem I regularly use since several years in town and for holidays, the seating position is a bit lower with the pedals further to the front of the vehicle. This reduces the overall height, but good visibility in road traffic is still guaranteed.

The base module is bounded by the rear and front wheels, the boom to the front pedals (including additional struts for the double pedals for children) or various transport boxes are removable.

In order to start and stop safely also with comprehensive rain cover, the versatile Cargotandem needs more than two wheels. Nevertheless, it should not be to wide for passing between cars in dense urban traffic or to use narrow cycling trails. As a quadricycle, the vehicle can be constructed more narrow at same stability, than a tricycle: Its width of 60 cm is the same as that of many two-wheel tandems or cargobikes.
The small wheels help to reduce the vehicle length and in curves also the vehicle width. Furthermore, a front seat or a load platform above the wheels makes use of the whole vehicles width without getting the centre of gravity to high. 18-inch wheels are well proven by the Brompton folding bicycle, in the city as well as on rural trails. 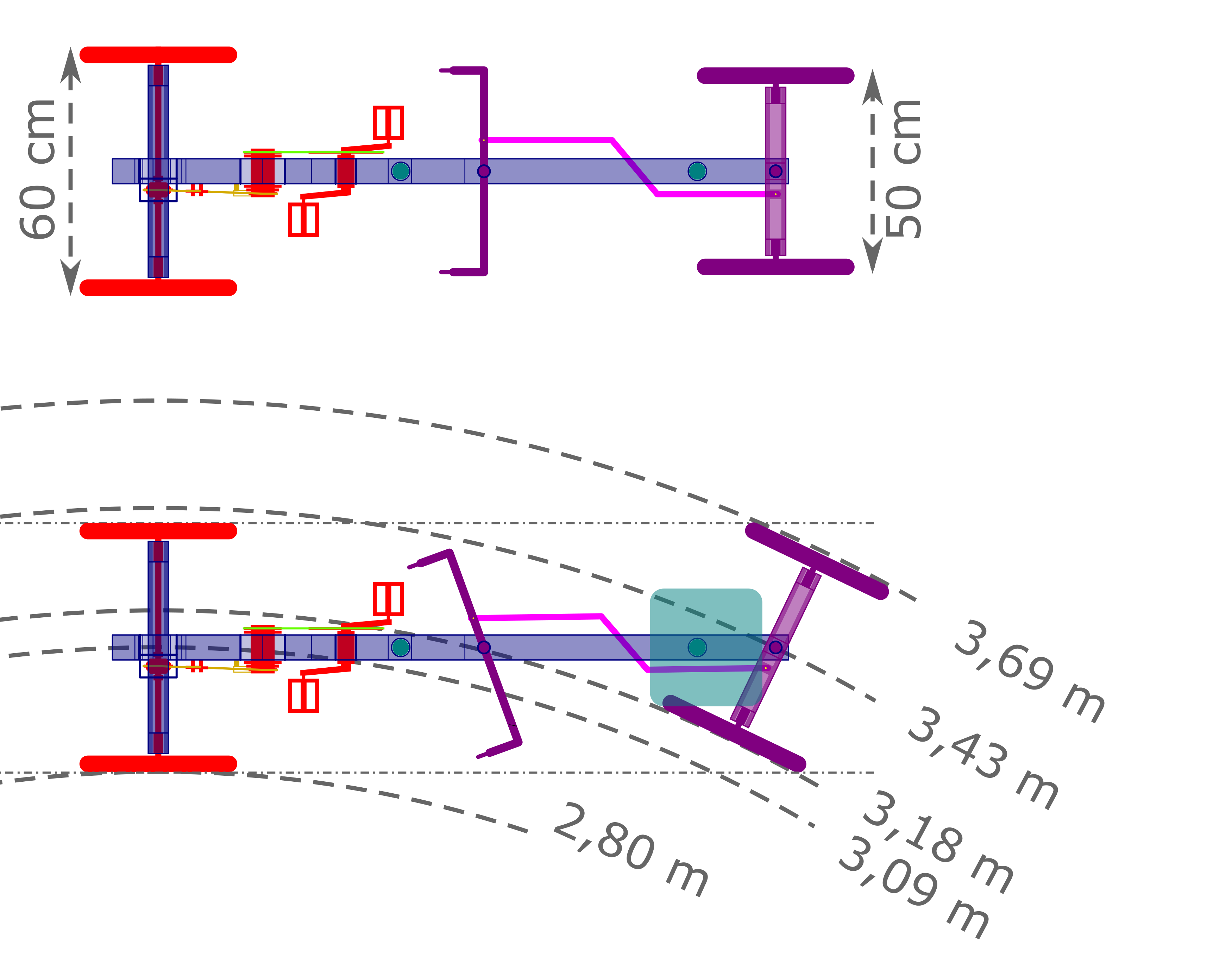 The usual turntable front steering as used for many cargo bikes with turning transport box is wobbly and incompatible with a tandem and a comprehensive rain cover. The version of the versatile cargotandem shown in the drawings has a turntable rear wheel steering and driven front wheels. This construction enables an optimal use of the space between the front wheels, in particular as children's legroom. Furthermore, the load or the stoker rests on the front wheel directy via a simple T-shaped frame.
A turning diameter of about 7,5 m allows a simple U-turn on a two-lane road.

In case of rear wheel steering and front wheel drive, a combinated gearing of gearing hub (rough) and derailleur (fine) similar to the Brompton folding bike is applied, for example as a well graduated nine-speed gear.

If the vehicle should be realized with front steering, similar to a conventional tandem the force from the stoker's pedal's chain ring is transmitted to an additional chain ring on the driver's pedal. From the driver's pedal to the rear wheels, the force transmission is similar to a special needs tricycle (one front wheel, two rear wheels) via a conventional internal hub or derailleur gear and a differential in the rear axle.

With the use of quick release mountings the seats can be removed out of the frame, the handlebar can be folded to a nearly horizontal position. Thanks to the small wheels, the big tandem converts into a compact base unit that can be accomodated in a space intended for two hanging bicycles. This facilitates not only storage in an apartment building, but also transport in the narrow bicycle compartment of a usual long-distance train.

Who is it for: Target groups

Using the bicycle for the last mile, the catchment area of public transport stops becomes 10 to 15 times larger compared to public transport access by foot. Therefore, Bike&Ride would be a very good solution for efficient and climate-protecting mobility in rural and suburban areas. Unfortunately, surveys indicate why in central European conditions the potential of the bicycle outside of urban agglomerations is realized only to a small extent: Only few people agree to be dependent on the bicycle as a means of transport for everyday use. The cargobike boom of the last years took place mainly in metropoles with good public transport available as an alternative at any time and sufficient local supply to carry grocery by foot if necessary. Among the most frequently mentioned reasons not to use the bicycle are the lack of weather protection and insufficient transportation capacity. Therefore, the most important new features of the versatile cargotandem are the rain cover combined with a big loading space.

As a family vehicle for daily trips the versatile cargotandem grows with its users: Childrens take first place in the big transport box, later they can contribute physically by pedalling on the front seat. This prolongation of the vehicle's useful life helps to justify the probably expensive initial acquisition of the vehicle. For users who ride the bicycle not only for daily short trips, but also for touristic purposes, the versatile cargotandem represents a multiply usable investition.

Although the most significant ecological benefit of the versatile cargotandem derives from the use for short trips in rural and suburban areas, thanks to weather protection and compact storage and transport it is also interesting for people who are cycling mainly in the city or during holidays. Thanks to this bundling of demand, the versatile cargotandem can be produced in larger lot sizes and sold at a lower price, particularly in the product launch phase if the rural and suburban use of unconventional bicycles gains momentum rather slowly.