Initial situation: Vehicle sharing systems everywhere except where you need it

Carsharing is often mentioned as a key element of a transition of the transportation sector towards sustainability: It should facilitate multimodal mobility with the targeted use of shared motorized vehicles only on that trip sections, that can't be covered well by foot, by bicycle or by public transport. This would not only lead to less kilometres travelled by car, but also less energy consumption per average car-kilometre as a single person would not necessarily use a car designed for 5 passengers and 130 km/h for a short trip. Furthermore, there are less vehicles required and for the most trips less range too. Thus, less energy and less raw materials for the manufacturing of cars and their batteries is required.

In practice, vehicle sharing systems met these expectations only to a very limited extent: Very flexible sharing systems for cars, bicycles or electric scooters developed dynamically in big cities, where it was quite easy to get around without a car already before. Outside urban agglomerations, carsharing is offered rarely and only under the condition that the vehicle must be returned to that point where it has been taken. Therefore, for many trips it is either impossible to cover only the "last mile" by carsharing unless the user pays an inadequately long rental period compared to a very short trip length.

An important reason for the lack of flexible carsharing in rural and suburban areas is the unsolved challenge of the redistribution of vehicles which is necessary to make them reliably available in the whole territory covered by the system. In central urban areas this problem is less significant as various origin-destination pairs with different trip purposes are rather compensating each other concerning the distribution of vehicles. If inequalities in distribution and availability of vehicles arise, public transport and taxis are always available. In rural and suburban areas the requirements are completely different: Carsharing must promise much higher reliability and massive use by commuters would lead to shortage of vehicles during the day in the outskirts and during the night in the centre of the respective region.

Redistribution of conventional sized passenger cars is much more complex than redistribution of bicycles or electric scooters: One option is the use of big car carrier trailers with time-consuming loading and unloading procedures. The other option is redistribution by teams of two drivers: one is driving the vehicle being relocated, the other one follows this vehicle in order to bring then the first driver to next vehicle that shall be relocated.

The efficiency of vehicle redistribution can be increased by a sharing system based on two-seat light electric vehicles that are shorter than the width of an ISO container. On such vehicle, the Renault Twizy is already on the market and Microlino/Karo are announced to be introduced soon.

Within the length of a 40' container it is possible to park 8 Twizies in such way that every second gap is wide enough to step in or out of the vehicle. In this case it is better to park rearwards in order to facilitate access from the sidewalk, not from the driving lane:

Within the length of a 45' container it is possible to park 9 Microlinos resp. Karos, but only if they are parked alternately forward and backwards. These vehicles are accessed through the front, so 4 out of 9 vehicles must be entered from the driving lane.

The total mass of the parked vehicles is in both cases less than 5 metric tons. Similar to many bikesharing systems, vehicles can be taken and returned only at rental stations but the system offers the flexibility to return the vehicle at another station than that where it has been taken.

The lifting mechanism for the container handling is integrated into the rental station, perhaps similar to claws grids:

In terms of load-bearing capacity and quick handling controlled from the driver seat a stationary lifting mechanism seems to be more suitable than a truck-based container handling solution as loading cranes or side loaders.

Trucks that are not fully engaged in redistribution of carsharing vehicles can be meanwhile used for the transport of other containers.

A comprehensive carsharing offer for rural and suburban areas is a valuable addition to public transport, but it can't replace public transport for the following reasons:

In order to achieve optimal rural and suburban mobility at reasonable costs for the public we need an optimized division of labour between the publicly accessible components means of transport:

Potential extension: Synergetic use of vehicles and drivers for demand-responsive public transport

For an efficient occupancy of drivers and vehicles it would be very helpful that the demand-responsive public transport is operated with the same drivers and the same vehicles that operate the redistribution of carsharing vehicles. In contrary to the basic variant that relies on light electric vehicles and (electric) semi-trailer trucks available on the market, this extension would require a new type of tractor unit providing some seats for passengers. In order to provide barrier-free paratransit the tractor unit should be extended to the front creating a low-floor space for a wheelchair or a baby buggy in front of the first axle and the entrance, next to the driver. If 40' containers are used, it seems still possible to comply with a permitted total length for semi-trailer trucks of 16,5m:

If the system is designed for 45' containers, such enlargement of the tractor unit for passenger transportation will lead to a total length of more than 16,5m making route-specific permits compulsory (at least under the legislation of Austria and some other EU countries):

The required renaissance of semi-trailer buses is more realistic than it might seem at first glance because the requirement of communication between driver and passenger is meanwhile solved by emergency intercom and video surveillance and semi trailer bus operation might anyway be an option to achieve synergy between the decarbonisation of both bus and truck operation.

The light electric vehicles proposed for the basic variant are still significantly wider than the space required for a person plus side walls. This is caused by stability requirements: Four-wheeled vehicles that are high enough for a comfortable seating position and sufficient visibility must not be too narrow, otherwise there would be too likely to overturn in curves. The vehicle width could be reduced and more vehicles could be accomodated within the same length of a container frame if tilting three-wheelers would be used. For parking these vehicles are stable as four-wheelers but at normal speed they tilt in curves like two-wheelers, so there is no need for a wider vehicle for stability reasons.
The reason why this solution is mentioned only as a potential optimization and not as the basic variant is that at the moment there is no suitable vehicle on the market:

Toyota i-ROAD and Nimbus Halo seem to have very similar dimensions, both have roughly this shape: 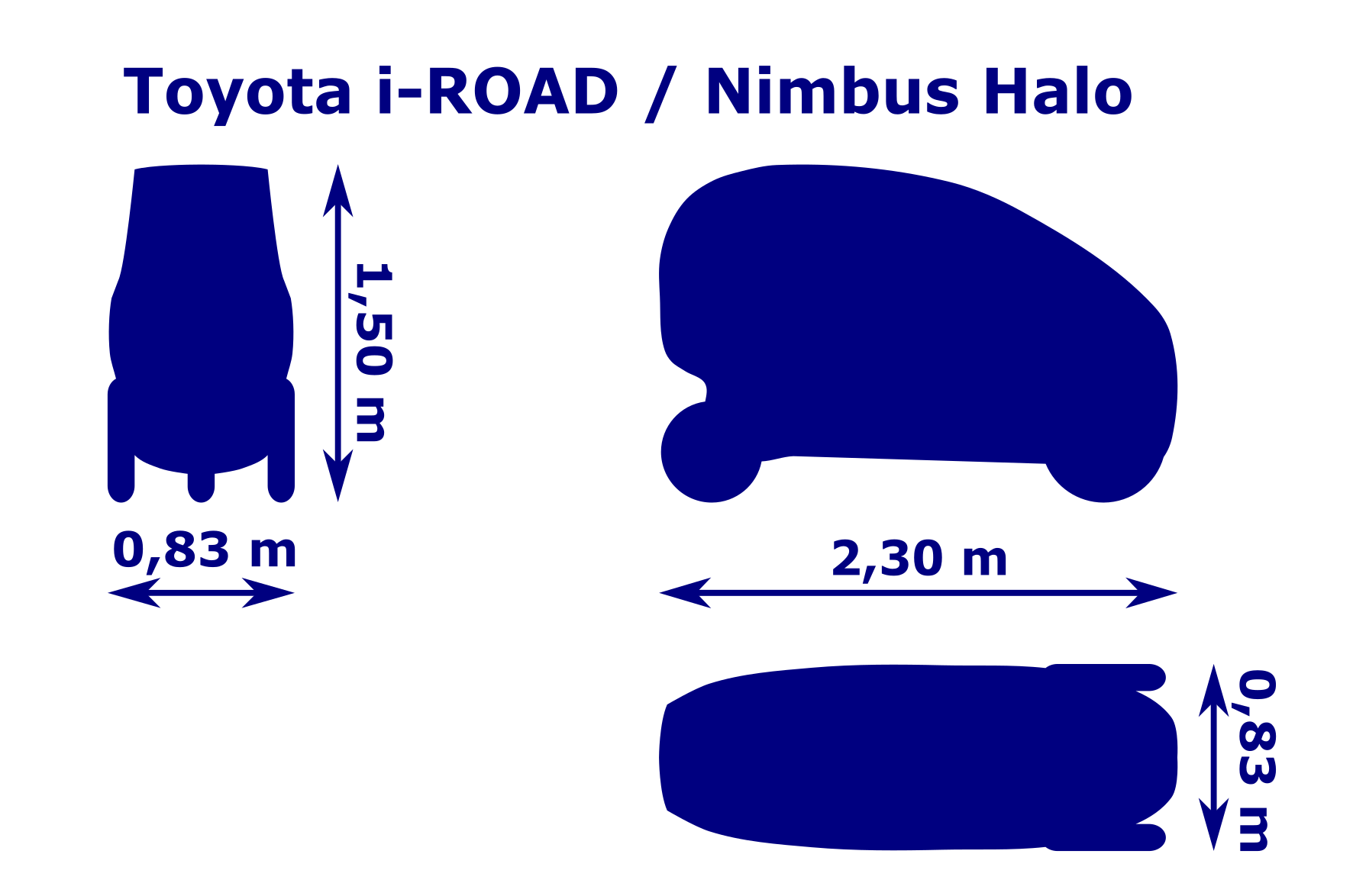 If it is possible to build a sufficiently load bearing container that consists out of a bottom plate and four vertical pillars in the corners only, without upper horizontal beams, less volume must be moved for the redistribution of 8-12 sharing vehicles. This could be used in two different ways for a further increase of efficiency:

A comprehensive flexible carsharing system covering the whole territory would facilitate a significant reduction of the degree of motorization: Many families could own one instead of two or even three cars and people living alone or in pairs would not need a car at all. People who need a bigger car sporadically for moving bulky goods can use conventional carsharing too, offering 5-seat passenger cars or even bigger vans but requiring the user to return the vehicle where it has been taken.

In order to reduce dependency from car ownership and consumption of critical battery resources even more, the flexible carsharing system could be improved by providing not only narrow two-seat light electric vehicles, but also wider vehicles for the transport of more than one child or much groceries. This would require the development of wider vehicles with more seats but anyway a width of less than 2,45m m to be parked transversely within the width of a standard ISO container: