The electricity consumption of 2-wheel-PRT of about 4,5 kWh/ 100 pkm (passenger-km) [7 kWh per 100 passenger-miles] is about 1/4 of an electric sports car, the half of an electric compact car or 1/3 of electric public transport. According to the EU electricity mix, the standard vehicle (occupancy rate 0,8 including redistribution of empty vehicles) resp. the enlarged vehicle (occupancy 1,4) have the same CO2 emission as a combustion engine driven car consuming 1,15 resp. 1,3 l diesel fuel per 100 km [0,5 - 0,55 gallons per 100 miles] at an average occupancy of 1,4 passengers.
Assumptions and references for energy efficiency calculation

Why is 2-wheel PRT so energy efficient?

An isolated system of self-steering vehicles on their own network can rely on car-to-car and car-to-infrastructure communication or use specific navigation marks as e.g. RFID chips or radar reflectors. The vehicle runs only on a high-quality road surface, there is no need for any off-road capabilities. The vehicle knows size and behavior of the other vehicles and the network is completely grade-free, avoiding difficult road configurations. All vehicles within the same road section run at the same speed, there is no need for overtaking. This makes the vehicles safer and cheaper and really autonomous operation becomes feasible, while the use of autopilot systems on public roads is still restricted to a low-density motorway network and presence and attention of a driver with a valid driving license. 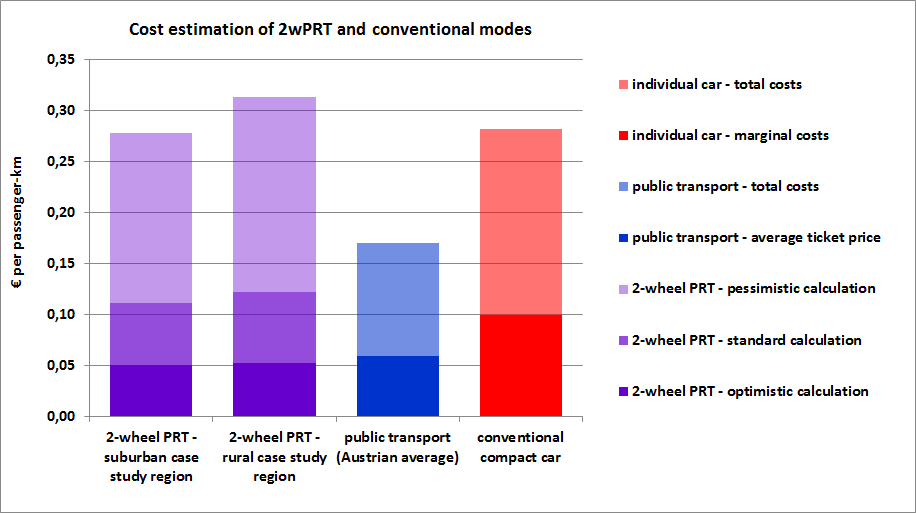 As a first approximation concerning economical feasibility, total costs of 2-wheel PRT were calculated for a suburban and a rural case study region in Austria. Inevitably big uncertainties concerning a variety of input values were considered by calculating separately with optimistic, medium and pessimistic assumptions, leading to a wide range of results:

Assumptions and references for cost calculation 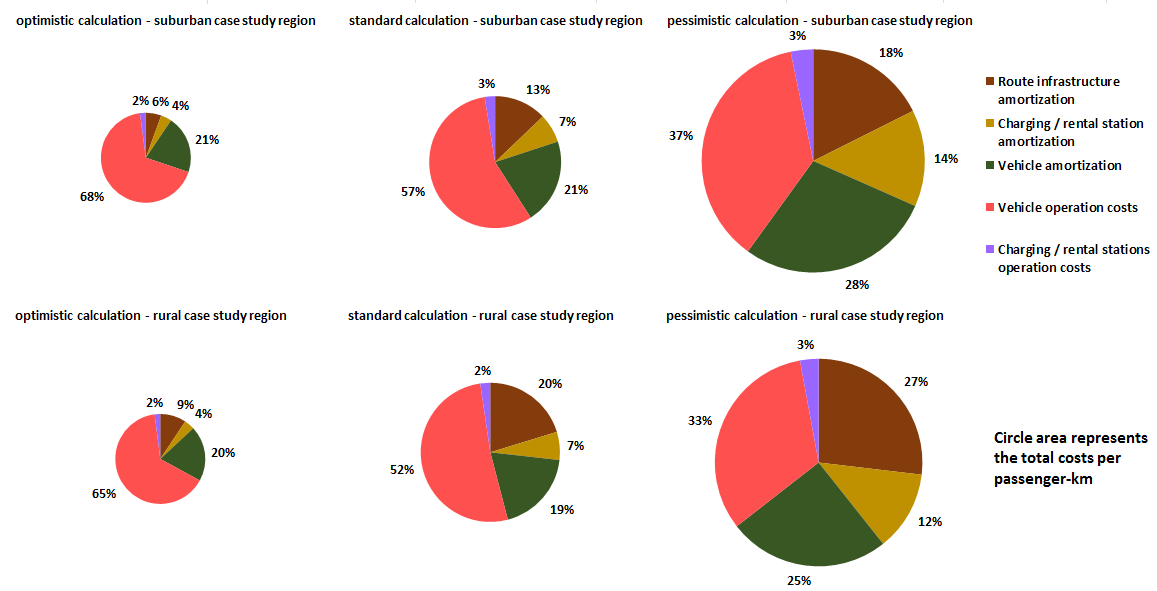 Proportionately to the wide range of input values, the share of route infrastructure costs, representing the most specific disadvantage of 2-wheel PRT, is between 6% and 27% of the total costs. Considering the cost-reducing effects of the separation from conventional traffic in terms of less required sensor technology and the spiral of passive safety, weight and engine output, these additional costs seem to be justified at least when applying the optimistic or the standard calculation.